Purpose: For young people with a migrant background in Germany transition from school to company-based vocational training is much more difficult than for non-migrants. This remains true, when data is controlled for the lower performance of young migrants in general education. In this paper we investigate if and how far the chances of transition to company-based vocational training and the acquisition of different school leaving certificates depend from the migration generation and the region of origin of young migrants. The question is, if disadvantages of young migrants diminish with a longer stay of their family in Germany and if this is also the case for the different groups of regions of origin (Southern Europe, East Europe, Turkey, other Middle East and North Africa, Other regions).

Methods: We conduct multivariate analyses on the basis of data from the German Educational Panel Study (NEPS). Our analyses relate to young people who left a general education school after Year 9 in the summer of 2011 or Year 10 in the summer of 2012. Our database comprises information provided by a total of 5,952 school leavers.

Results: For all four origin groups worse chances in comparison to non-migrants were detected. But there are differences in the disadvantages of opportunity between the various groups. They acquire more often lower school qualifications than their counterparts not from a migrant background and also have worse chances than the latter of successfully progressing to company-based vocational education and training. This applies even if other important influencing factors such as social origin are taken into account. Young people from a Turkish or Arab background have the lowest chances in general education and vocational training. As generation status rises disadvantages diminish for all origin groups, but with different magnitudes. A clear upwards-directed integration can be observed solely for the East European origin group.

Conclusion: The results of our analyses signalise a clear need for action on the part of German policy makers and German society to reduce the educational disadvantages suffered by young migrants and to develop an effective support mechanism. Integration is rarely achieved in the short term. It is a long-term task which frequently extends over several generations.

Beicht, U., & Walden, G. (2019). Transition to company-based vocational training in Germany by young people from a migrant background – the influence of region of origin and generation status. International Journal for Research in Vocational Education and Training, 6(1), 20–45. https://doi.org/10.13152/IJRVET.6.1.2
Download Citation 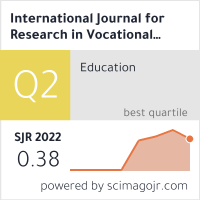 IJRVET Yearbooks are offered since 2017. For all articles see Archives.

The official journal of